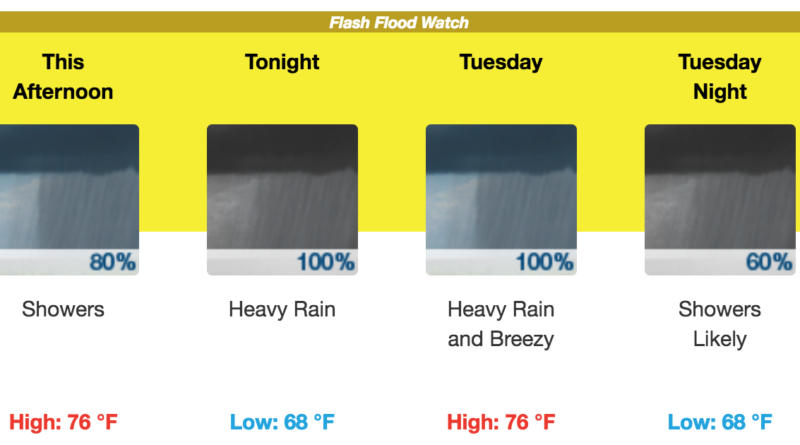 News Science & Nature
October 1, 2018October 2, 2018 Robert Roy Britt rosa, weather
For 15 years, In&Out Magazine has been the definitive source of “Everything that’s going on” in and out of the community. We thank you, our readers, as well as the businesses that support the magazine through advertising, for that opportunity. But with little going on, and many businesses suspending or canceling their ads during the Covid-19 crisis, we are suspending publication of the magazine and web sites for the month of May.

UPDATED 9:09 p.m. Monday, Oct. 1 — Light rain fell in many parts of North Phoenix Sunday night into Monday morning, barely registering in rain gauges. Sprinkles resumed Monday night. The bulk of the the precipitation from the remains of Hurricane Rosa are expected Monday night through Tuesday.

A Flash Flood Watch remains in effect through Tuesday evening, with Anthem, New River and other areas north of the Carefree Highway most at risk for heavy rains and flash floods as mountains enhance rainfall potential. The heaviest downpours are expected tonight.

Most of the precipitation so far in the Valley fell in the southern reaches. Sky Harbor Airport got a quarter-inch by Monday morning, and multiple gauges near South Mountain recorded a half-inch. The rest of Monday was mostly cloudy but offered little rain.

With the first phase of the storm having passed through, the weather service issued a fresh prognosis Monday afternoon on how much rain can be expected from now through Wednesday. It calls for 1.5 to 2 inches in Phoenix, but the city is on the border of a region that will is expected to get less. Uncertainty remains.

The center of Tropical Storm Rosa was expected to make landfall on Baja California Monday night or early Tuesday morning, with its predicted path holding steady and cutting straight through Arizona. Forecasters had earlier expected 2-3 inches of rain in North Phoenix by Thursday, but had said that a deviation in the path could result in less rain.

The Flash Flood Watch means there is a better than 50 percent chance a warning could be issued.

“It’s really all about the rain,” said Austin Jamison, a meteorologist at the National Weather Service office in Phoenix, said over the weekend. If the expected track holds, flash flooding is likely in Phoenix, and “especially in North Phoenix, and especially north of the Carefree Highway,” Jamison said.

By Monday night, Rosa’s maximum sustained winds near the center were 40 mph, down from 145 mph last week. The weakening was expected. The storm is not expected to produce monsoon-like winds in the Valley. Gusts up to 20 mph could occur Tuesday.

Rainfall predictions from the National Hurricane Center remain just as they have been the past two days:

“Monday night into Tuesday, that’s the main window where we’ll see very persistent and frequent showers, and occasionally heavy rain” in North Phoenix and up into the high country, Jamison said over the weekend (and that outlook appears still to be relevant given the Monday evening forecast). “That’s the time frame when flash flooding is most likely.”