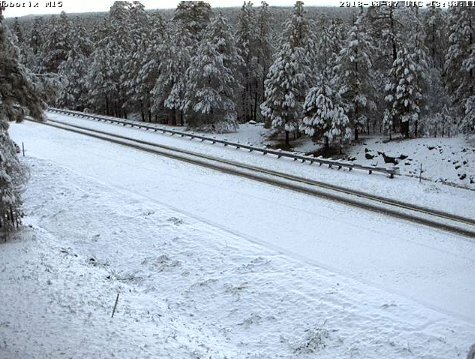 News Science & Nature
October 7, 2018 Robert Roy Britt weather
For 15 years, In&Out Magazine has been the definitive source of “Everything that’s going on” in and out of the community. We thank you, our readers, as well as the businesses that support the magazine through advertising, for that opportunity. But with little going on, and many businesses suspending or canceling their ads during the Covid-19 crisis, we are suspending publication of the magazine and web sites for the month of May.

Snow fell in the northern Arizona mountains as an overnight storm dumped more than 1/3 of an inch of rain across North Phoenix by mid-morning. At Sky Harbor airport, rain so far this morning set a record for the date of 0.41 inches. Added to Rosa’s rains, this October has been the third wettest since record-keeping began in 1895.

More rain is possible today and into tomorrow. And another round could arrive late in the week as the remnants of what’s now Hurricane Sergio push into the Southwest. Sergio’s path remains uncertain, however, and it’s looking more likely that it could mostly bypass Phoenix to the south.

As of 9:30 a.m., the overnight storm brought 0.47 inches of rain to the far west side of Anthem, 0.39 inches to Tramonto, 0.31 inches to Sonoran Foothills, and 0.35 inches to the Norterra area. Other officials gauges in the North Valley recorded similar amounts.

An ADOT snowplow clearing SR 87 above the Rim and north of Strawberry. #azwx #aztraffic pic.twitter.com/1P5AzruMMt

The potential for significant rain from Hurricane Sergio is “becoming less likely” with each new analysis, according to this morning’s forecast discussion from the National Weather Service office in Phoenix. The likeliest scenario would bring 1/4-inch or less on Thursday and Friday. “However, a shift in the track, notably to the north, could bring substantially more rain and a widespread flash flooding risk. At this point, it is still too early to discount widespread impacts.”

Sergio is expected to make a turn to the northeast and head for Baja, much as Rosa did. But Sergio is already predicted to make landfall farther south than did Rosa.

Today’s storm system was anything but tropical, having moved into Arizona from off the Pacific Northwest coast. Have a look:

It's pretty if you don't have to drive in the snow. This is along I-40 near Ash Fork. Stay off the roads if you can. Northern Arizona highways are wet with snow and rain. #aztraffic #azwx pic.twitter.com/HiVcvT84yp

Take it slow on SR 87 north of Payson near Clints Well. It looks like there is an accumulation of snow on the highway. #azwx #aztraffic pic.twitter.com/yZh71zE0F2