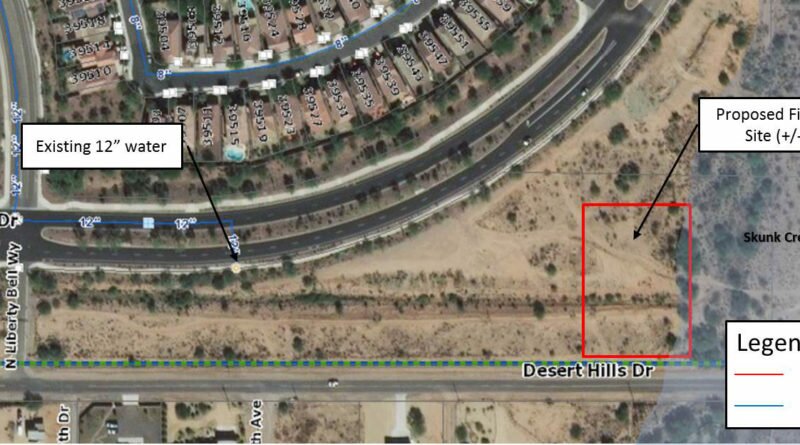 News
April 25, 2018May 1, 2018 Robert Roy Britt desert hills, epcor, new river, water
For 15 years, In&Out Magazine has been the definitive source of “Everything that’s going on” in and out of the community. We thank you, our readers, as well as the businesses that support the magazine through advertising, for that opportunity. But with little going on, and many businesses suspending or canceling their ads during the Covid-19 crisis, we are suspending publication of the magazine and web sites for the month of May.

UPDATE April 27: Phoenix announced it would extend its deadline to shut off the supply of hauled water to rural residents.

A water-hauling station to serve residents of New River and Desert Hills will be operational by the end of July, the utility EPCOR now says. But in this months-long saga, rural residents now face, yet again, a gap in their water supply. The City of Phoenix plans to shut off the supply of hauled water for some 1,500 rural residents April 30.

EPCOR got a green light from the Army Corps of Engineers for the oft-delayed project, to build the filling station on a leased acre of land at the eastern edge of Anthem. The Army Corps had held up the project because the land was in a flood control area and designated as Natural Area Open Space (NAOS). The Corps recently waived the rule so the project can proceed, according to EPCOR.

Will Phoenix Extend the Deadline?

District 3 Supervisor Bill Gates, who has been among various individuals and groups working on  a solution since last fall, sent a letter today to Thelda Williams, Vice Mayor of Phoenix, asking for another extension.

“EPCOR has been willing to continue to go above and beyond its responsibilities and expend time and resources to find a solution to provide much-needed water to the community,” Gates wrote. “I am writing to ask the city of Phoenix and Phoenix Water Department to consider an extension.”

So far, Phoenix officials have not committed.

“The City of Phoenix is assessing and monitoring the current situation,” said Stephanie Bracken, spokesperson for the City of Phoenix Water Services Department. “We will make any decisions regarding a deadline extension at the appropriate time.”

The project was conceived last fall when homeowners in New River and Desert Hills learned Phoenix planned to stop allowing water haulers to use city hydrant water for delivery outside the city. Up to 1,500 of the nearby rural residents are said rely on trucked-in water, and more may need it in the future as wells continue to dry up amid a 21-year statewide drought.

It’s a déjà vu moment. When EPCOR committed to building the water-hauling station, Phoenix held out until the 11th hour—until EPCOR determined a completion date—then extended its original shutoff deadline from Dec. 31, 2017 to April 30, 2018.

If Phoenix doesn’t extend the deadline this time, “residents reliant on hauled water face a difficult challenge: pay two to three times more than they are currently paying to receive hauled water from water haulers or find ways to be even more efficient and reduce their water consumption,” said Julie Elliott, president of New River/Desert Hills Water, a grassroots group that has been working on a solution since September.

“The residents of our area are frugal with their water resources, and they manage to survive on much less water than other areas of the Valley,” Elliott told North Phoenix News today. “The harsh reality is that the increased costs may be out of reach for many residents of New River and Desert Hills and the communities may need to come together to help those in need. We are cautiously optimistic, however, that the City of Phoenix will work with the community to extend the water hauler permits until EPCOR is able to complete construction of the hauling station.”

See images of the project below.

Feb. 13 After Anthem officials see first draft of EPCOR’s site plan and council members walk the site, theutility is asked to make modifications, and a meeting is set for Feb. 22 to hopefully render a decision.

April 3  EPCOR reveals that the project hits a permitting snag with the Army Corps of Engineers and it won’t be completed by April 30.

Late April EPCOR announces permits are in hand and the project will be completed by the end of July, 2018.